Does anyone not love French Toast?
This Fruity Baked French Toast is definitely one you will want to try.

It’s my go to breakfast treat.

And it’s one of the things I most often order when out for breakfast, usually accompanied by bacon and maple syrup.

But how about a healthier version?

I’m a big fan of The Batch Lady, I have both her books and I’ve made her Blueberry French Toast a few times so this recipe is very much inspired by that. I just wanted to add in raspberries which I love and I wanted to add a layer of brioche on top so the fruit was sandwiched in between. The only thing better than one layer of French Toast is two, right?

This Fruity Baked French Toast is a great recipe for getting some more fruit into your day as well as calcium from the milk and protein from the eggs. It only has a little maple syrup in so there’s not too much sugar but just enough to add a touch of sweetness.

Start by cutting the brioche into squares and use about 3/4 of them to cover the base of a large pie dish.

Then cover with a layer of raspberries and blueberries.

Top with the rest of the brioche. Whisk together the eggs, milk, maple syrup, vanilla essence (I used homemade but that’s a post for another time) and cinnamon and pour over the brioche and fruit.

It’s such an easy breakfast/brunch to make but you do have to restrain yourself from putting it straight in the oven. leaving it to chill and soak up the milky egg mixture is well worth the wait.

Once chilled heat the oven to 180 degrees celsius and pop the dish on the middle shelf and bake for 30 minutes.

What to serve with your Fruity Baked French Toast?

I served mine with chopped strawberries and grated chocolate. It’s also great with a dollop of Greek yoghurt.

Print out the recipe below and add to your collection. 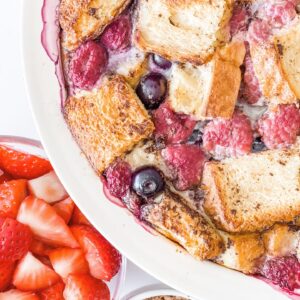 Don’t forget to Pin the recipe so you can easily find it later.

Feel free to share the recipe and let me know if you try it.

Why not check out my recipe for easy Crustless Quiche Muffins.

This site uses Akismet to reduce spam. Learn how your comment data is processed.

Hi I am Karen and I live in Northern Ireland with my hubby and grown-up kids. We have three furry lunatics who kindly let us live in what is clearly their kingdom and all together they keep me on my toes and young at heart.

A little doodle for a chilly January day. #charact

Who’s ready for a snowball fight? It’s getting

Can you tell I’m hoping for snow this winter? Pl

A little Wintery doodling today with brushes from

Last of the spooky season drawings because tomorro

Last of this week’s prompts from @bardotbrush is